Based on Sukhoi Su-27 'Flanker', the two-seat Su-34 is designed primarily for tactical deployment against ground and naval targets (Tactical bombing/attack/interdiction roles, including against small and mobile targets) on solo and group missions in daytime and at night, under favourable and adverse weather conditions and in a hostile environment with counter-fire and EW counter-measures deployed, as well as for aerial reconnaissance.

The aircraft shares most of its wing structure, tail, and engine nacelles with the Su-27/Su-30, with canards like the Su-30MKI, Su-33, and Su-27M/35 to increase static instability (higher manoeuvrability) and to reduce trim drag. The aircraft has an entirely new nose and forward fuselage with a cockpit providing side-by-side seating for a crew of two. The Su-34 is powered by a pair of Saturn AL-31FM1 turbofan engines, the same engines used on the Su-27SM; giving the aircraft a maximum speed of Mach 1.8+ when fully loaded. When equipped with a full weapons load, the Su-34 has a maximum range of 4,000 kilometres (2,500 mi) without refuelling, this can be extended further via aerial refueling. When operating at its operational maximum, the airframe can withstand an 'overload' of up to +9G.

The Su-34 is a three-surface design having both a conventional horizontal tailplane at the rear and a canard foreplane in front of the main wings. The foreplane provides both additional lift (force) and greater manoeuvrability. It has twin tail fins like those of Su-27 from which it is derived. The Su-34 has 12 hardpoints for up to 12,000 kilograms of ordnance, intended to include the latest Russian precision-guided weapons. It retains the Su-27/Su-30's 30 mm GSh-30-1 cannon, and the ability to carry R-77 air-to-air missiles (6 pcs) and R-73 (also 6). The maximum weight of any single munition carried is 4000 kg, with a maximum munitions load the maximum attack range is 250 kilometres (160 mi). A Khibiny Electronic countermeasures (ECM) system is fitted as standard.

The Su-34's most distinctive feature is the unusually large flight deck. Much of the design work went into crew comfort. The two crew members sit side by side in a large cabin, with the pilot-commander to the left and navigator/operator of weapons to the right in NPP Zvezda K-36dm ejection seats. An advantage of the side by side cockpit is that duplicate instruments are not required for each pilot. Since long missions require comfort, the pressurization system allows operation up to 10,000 metres (32,800 ft) without oxygen masks, which are available for emergencies and combat situations. The crew members have room to stand and move about the cabin during long missions. The space between the seats allows them to lie down in the corridor, if necessary. A galley and toilet are located behind the crew seats. A ladder attached to the nose landing gear and a hatch in the cockpit floor is used to enter the cockpit. The cockpit is a continuous capsule of armour (17 mm). The Helmet Mounted Display System (HMDS) acts as a command center: precision target designation of all onboard weapons is tied to the movement of the pilot's head and eyes. 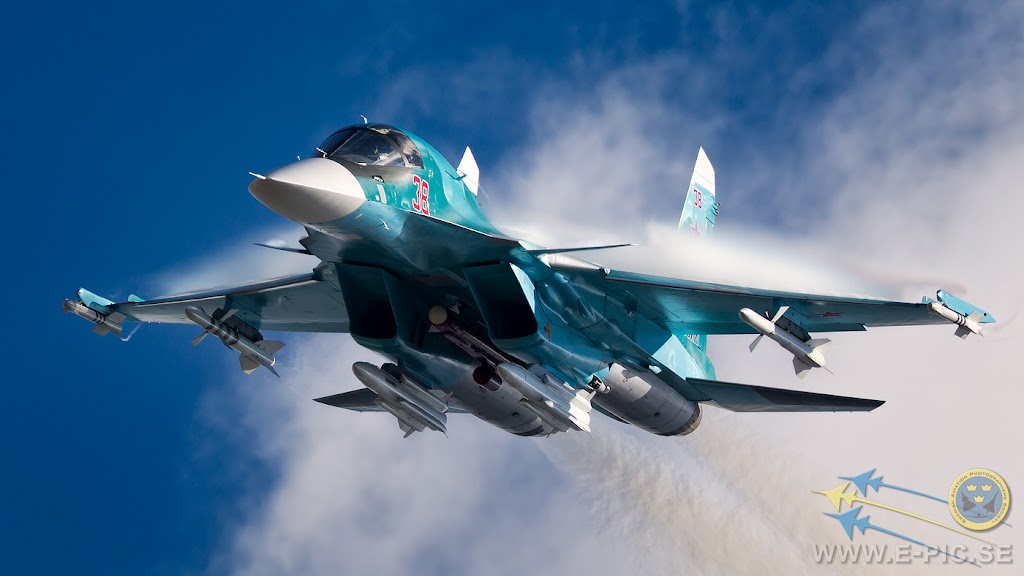