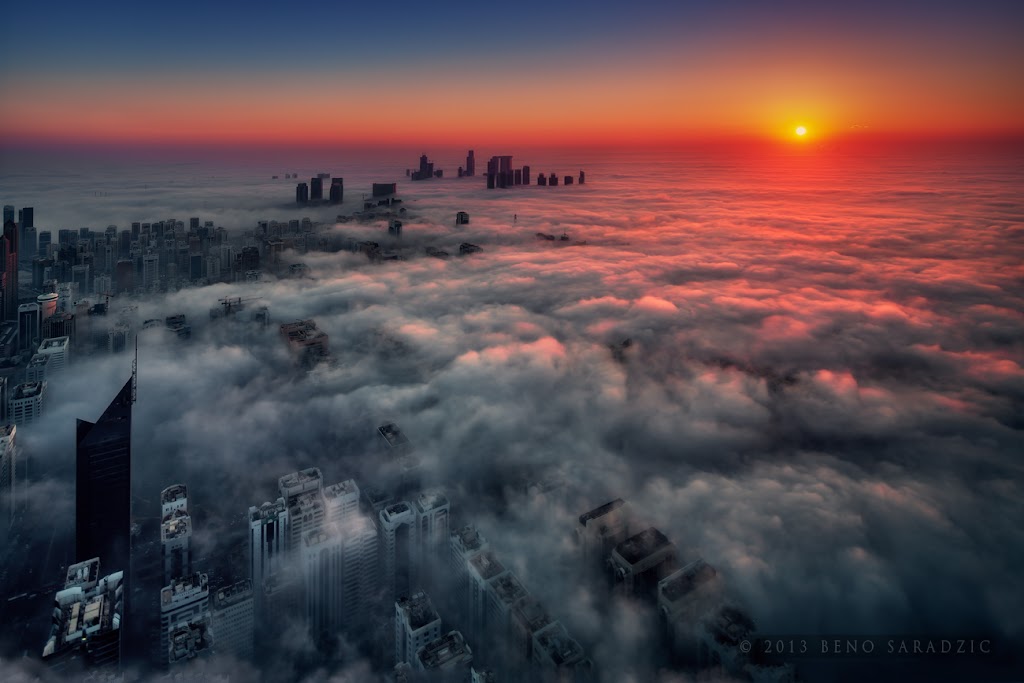 This story of how the shot was taken and the shot itself deserves a lot more plus 1s and followers….. +Beno Saradzic

Many never care about the how behind the shot.. We need to start to care more… Because patience and skill are part of being a pro and many today feel these items are no longer needed in the pursuit of truly pro level images..

Too include me who is just not patient enough most of the time..

24 January 2013 at 7:08 am was a very special one. I've witnessed one of the most breathtakingly beautiful sunrises of my life…and I had a camera to capture this perfect moment. It doesn't get better than that.
This is Abu Dhabi, capital of the United Arab Emirates, photographed from the peak of its highest superskysraper, The Domain. This architectural gem, designed by Sir Norman Foster is currently under construction and nearing its completion.
When I took this shot, I was standing on a very scary ledge which was made out of scaffolding and wooden planks. I was too excited by the sight of the fog and the sun.
I was too hypnotized by the sense of urgency to capture this sight before it was gone to realize that I was standing ON THE OUTSIDE of the building, on the bloody 98th floor! It's a bit hard to describe what's it like to stand over the 381 meters deep abyss, separated by nothing but a plank of wood…  ( that's 1,250 feet for those who don't get metric system.) When I finally came back to my sense and realized where I was, my knees were softer than Chinese steamed buns. I got back into the building in a crouching-tiger position, ready to crap my pants like a 2 weeks old baby!

This is a 5-stop HDR exposure which was barely enough as the contrast was overwhelming. 9-stop range would've been better but there was really little time to think straight, considering the slightly extreme circumstances.
Image was processed in a 16-bit per pixel colour space in order to maintain the subtle gradations in the sky. Sometimes, billions of colours are better than millions.
I used Canon 5dmk2 with the most amazing lens Canon ever made, the super-fabulous Canon TS-E 17mm f4.0L. This lens is a wondrous instrument made by the Gods.
Promote Remote Control was used for HDR bracketing. I can't recommend this gadget quite enough.
Gitzo GT5541LS tripod had to be fixed to the scaffolding handrail with the pair of Manfrotto Magic Arms. Without them…well, I don't even want to imagine the alternative.﻿